My Tips for Traveling With Young Children 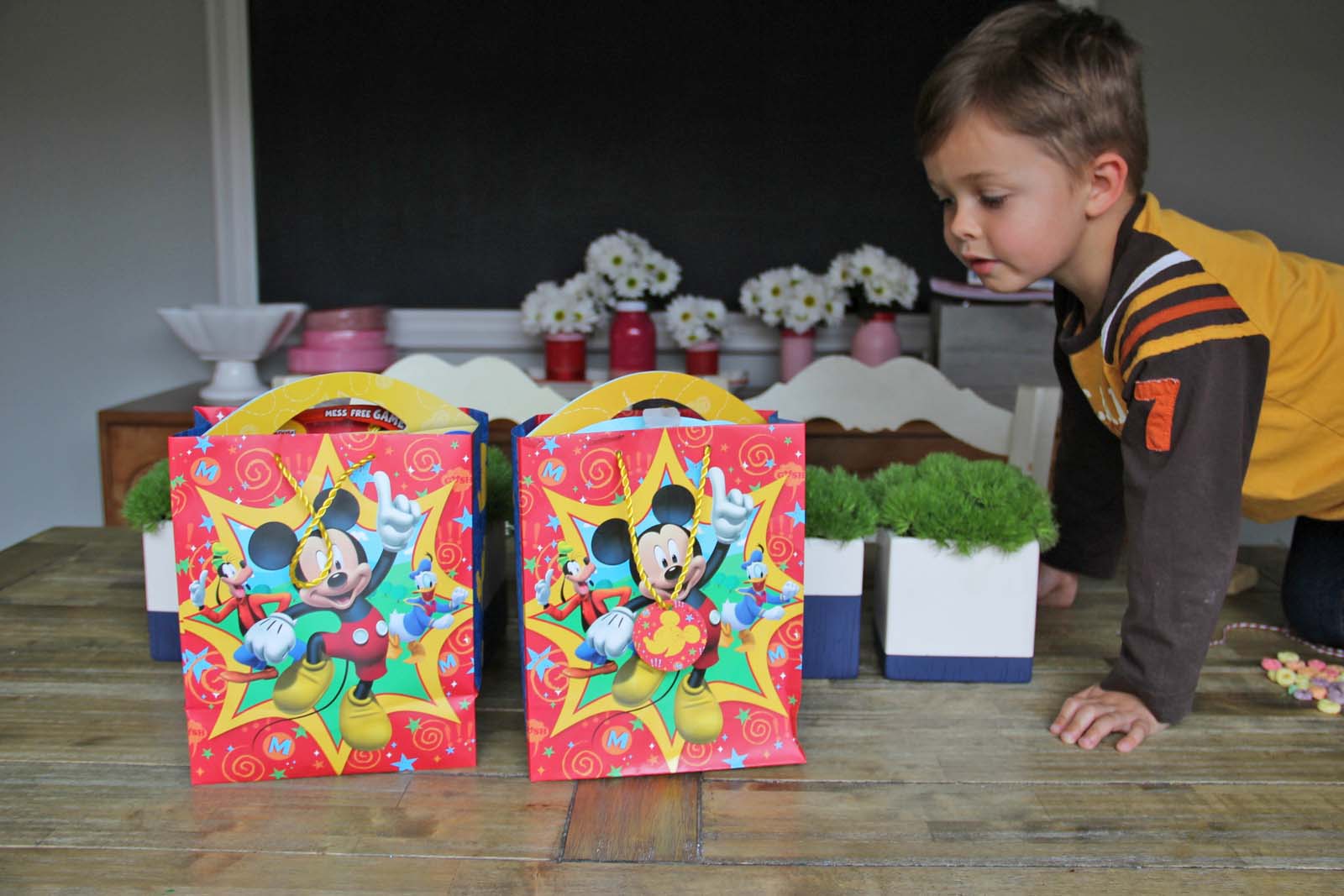 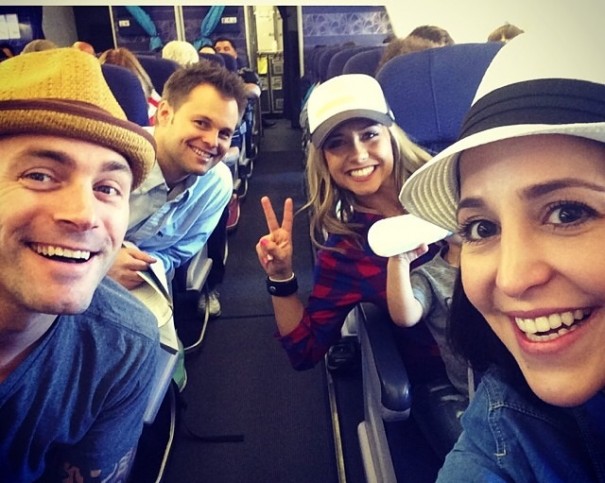 We each have a kid sitting next to us. And Ben has Sawyer on his lap.

Many of you who follow along on instagram know that we recently took a family vacation to Hawaii with some friends of ours. Ben surprised me with an 8 day trip to the Disney Aulani resort for my 30th birthday.  He set up an elaborate scavenger hunt through our neighborhood leading to a final clue that revealed we would be hanging out by the pool, playing in the ocean and dining by the beach with Mickey and Minnie.  Now, here’s the part where I sound like a complete brat…

I was grateful. I felt loved. And appreciated.
BUT, I wasn’t excited–not one bit.
Wesley was jumping up and down shouting “disneyland beach, disneyland beach” as Ben looked anxiously in my direction, eager to see my reaction. It took every ounce of strength I had to give him a smile.

That was all I could say, wow.

A few years ago, I watched as Regis and Kelly promoted the opening of a Disney resort in Hawaii. Since then, I haven’t stopped telling Ben how that would be my dream vacation. I can’t even count how many times I googled about the resort and then anxiously turned the screen around for Ben to see what was making me so giddy. A beach, a resort AND Disney goodies for the kids = best of both worlds. So you can imagine his confusion at my lack of reaction.

Ben: Are you even excited?

Me: Of course I am. (I lied) I guess I’m still adjusting to the shock. Thank you so much sweetie, what a nice surprise.

I gave it a few days before I let Ben in on my “lack of enthusiasm” for our upcoming trip.

For more reasons that I can count, our boys are about the least awesome travel companions in the world.  Between Sawyer’s motion sickness, Wesley’s sensitive ears and both boys lack of a “go with the flow” attitude–well, it’s safe to say that we have not yet had a positive travel experience.  They have all been disasters, in fact. Disasters that involve vomit, lots of vomit…a trip to the ER…poo explosions…blood curdling screaming for the ENTIRE duration of our flight…and NO sleep, I repeat NO sleep on the entire trip. I’m certain that I’ve lost several years of my life as a result of those travel experiences.  I didn’t think my heart was ready for another trip so soon–especially one that involved a 6 hour plane flight…with another family…another family that we love, and a family that I wished to keep loving us in return–a wish I certainly couldn’t keep if they became our unlucky vacation companions.

Ben: I’m scared too…But we need this. The boys need this. We can do it. This time could be different…

And because I trust him with my whole heart and my whole life (and because deep down this was still my ultimate dream vacation) I changed my attitude and found the excitement mounting as each day got us closer to departure for the Hawaiian beaches. I plan to write a few posts on our vacation experience (which turned out to be awesome, by the way).  But this post is written just in case there are any other parents out there like us…with children similar to ours…who are scared about upcoming travel plans and impeding meltdowns.

These are my tips…lessons I’ve learned (often the hard way) while traveling with kiddos. It’s a bit lengthy… 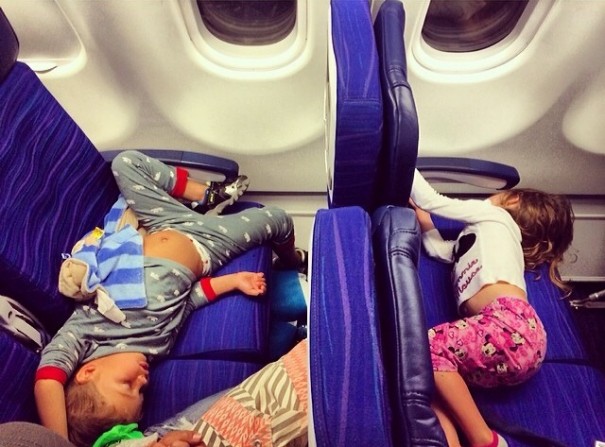 The kids slept the entire red eye flight home (and you can see parents didn’t sleep since the kids took up both spots).

Ben and I always like to call the hotel in advance and make sure they know we have small children.  We ask that they have a playpen in the room for us so that Sawyer can go down for a nap right when we arrive if needed.

Our double stroller is much too bulky for airplane travel.  But we also know that a stroller is necessary for kiddos who will get tired and need to rest their little legs.  We brought our single B.O.B. and then brought a bjorn chest carrier for Sawyer.  I pushed the stroller and ben carried sawyer on his chest.  We were able to roll the stroller right up to gate and then they put it below the plane for the flight. We didn’t have to pay extra, it just counted as a carry-on (although no one has ever counted it against us).

Wesley is now at the age where he must have his own seat on a plane.  And while it is a bit of a pain to lug a massive carseat through security and the terminal, we figure “hey, we need a carseat when we land anyway”…and mostly, we’ve learned that Wesley is a lot more comfortable and better behaved if strapped in a carseat just as if we were on a long car trip. I find that he is less inclined to want to wander the plane and/or leave his seat.  Then when we land we don’t have to worry about renting one.


This is key.  And not just any bag.
The airplane bag must be the swiss army of purses.  A tote generally works best. Mine has lots of compartments, opens easily and wide, is able to be reached into without having to unzip a million zippers and allows me to load up all the necessities with minimal stacking.  The idea is that at a moments notice I can reach in and grab exactly what I need before meltdown ensues.  I like for the bag to be large enough to hold everything I need, but small enough to be stowed underneath the seat in front of me for easy access. Something like this could work. I used this bag that I got years ago and it works like a charm.

Whats in the bag.
Only the essentials…and also those things necessary to distract my children from throwing themselves into the aisle of the plane kicking and screaming (ok, so maybe I’m being a bit dramatic).

One sippie cup for the boys to share and refill. Diapers and wipes.  Extra outfit for Sawyer. Antibacterial gel. iPhone charger. iPad. We load the iPad in advance with games and movies that don’t require wifi since many planes don’t offer it for free, and if they do it can often be faulty. This time we surprised Wesley with a new movie that he had been wanting to see–helped to keep him more interested in watching the whole thing. Headphones.  We tried to buy those “kid safe” headphones with volume control so that the kids don’t listen to their shows too loudly–but turns out the sound is so low that you can’t hear a single thing over the loudness of the airplane engine–lesson learned. Also, when it comes to headphones I found it easiest to get the kids used to wearing them at home so that they wouldn’t have any issues wearing them on the plane. I know headphones can be uncomfortable or awkward for many kids so it helped us to desensitize in advance. Frozen bottles.  Sawyer still drinks a milk bottle–so the night before we leave we freeze a bottle so that it can stay fresh for the flight.  We pull it out right at take off to help keep his ears from hurting as we increase altitude.  Snacks divided into individual servings in baggies so they lie flat. I do my best to bring only their favorite snacks and a few special treats. I include a separate zip pouch that I keep my stuff in (chapstick, keys, wallet, glasses, etc)–that way if I leave the kids with ben for a second I can grab my pouch without having to lug the whole tote. And then, of course, I pack the activities (see below). 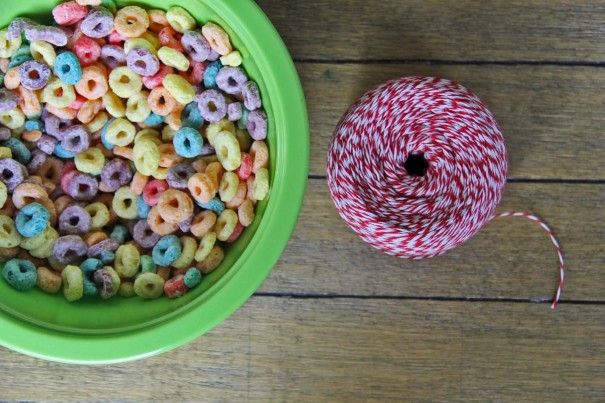 I got in touch with a dear friend a few days before our trip and begged for her advice for keeping the kids busy on the plane (she has 3 energetic boys of her own and has flown with them to hawaii several times).  She gave me a couple genius ideas that I need to share.  First, fruit loop necklaces.  I had wesley make his in advance so that he was extra excited when I let him eat it on the plane.  Eating these was a big hit for Sawyer too and ate up a good chunk of time. The only bummer, Sawyer dropped his on the ground and the thought of yucky airplane floor germs forced me to toss it before he had finished it. 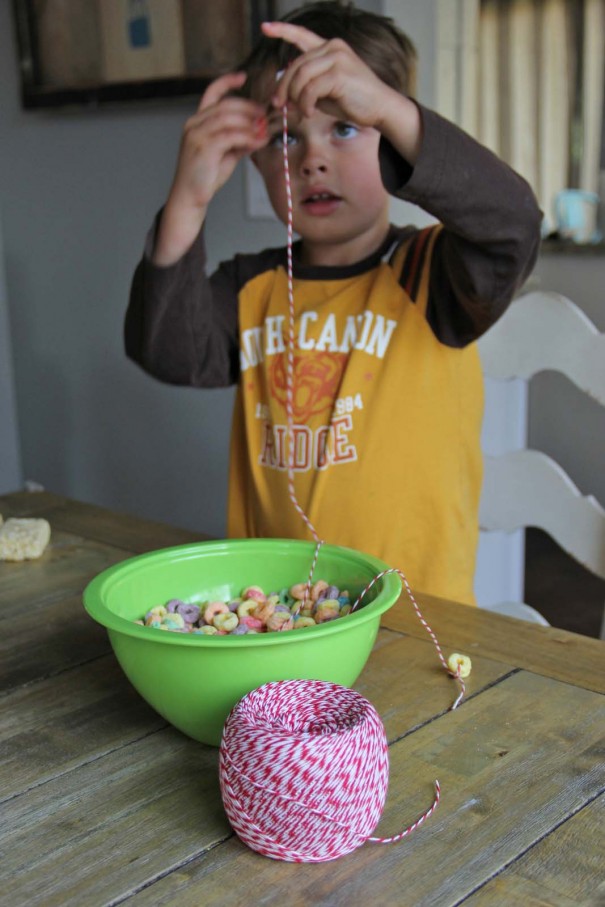 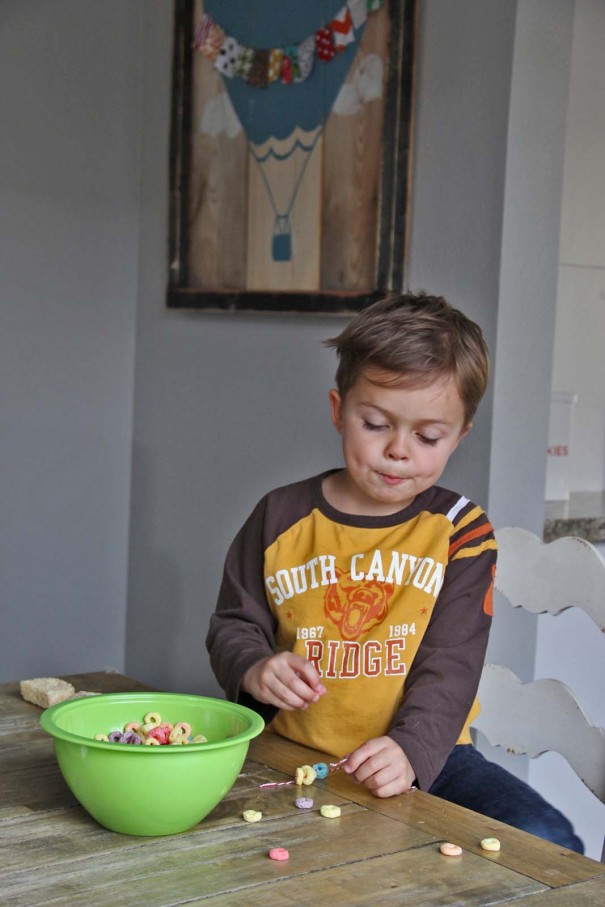 My friend who we were traveling with (lacey) was so sweet and thoughtful and put together “disney” themed good bags for the kids–they knew that they couldn’t open them until we were on the plane and ONLY with good behavior–or as we like to say in our house “when we make good choices”. 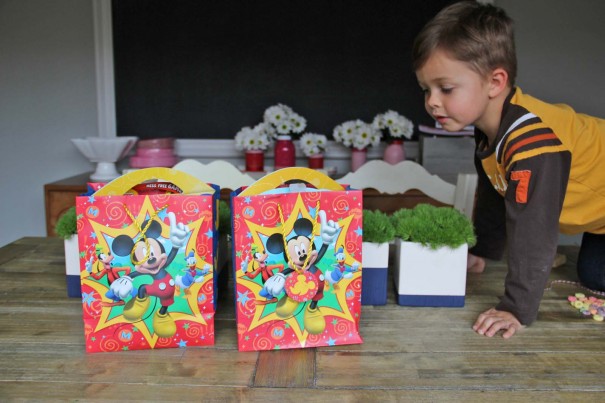 The bag had a coloring book, a doodle pad and one of those awesome “magic” marker coloring books so the kids couldn’t get marker all over the plane.  There were also some special treats like a lollipop and ring pop. 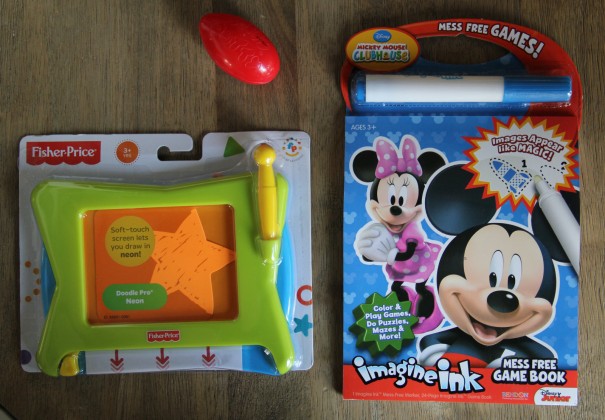 I grabbed a few goodies to ad to the bag.  Each kid got a new hot wheels car and I brought painters tape so that I could create a “race track” on the tray table.  Also, I made sure to go out and get the triangle shaped crayons so that I didn’t have to spend the entire flight picking up crayons that rolled onto the floor. I keep the crayons in this cute crayon caddy that I got on etsy. 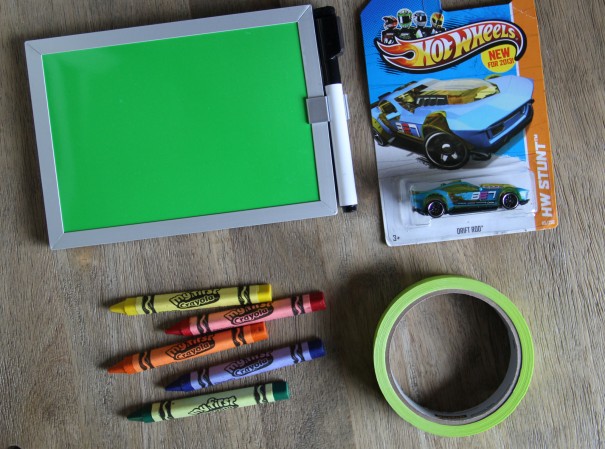 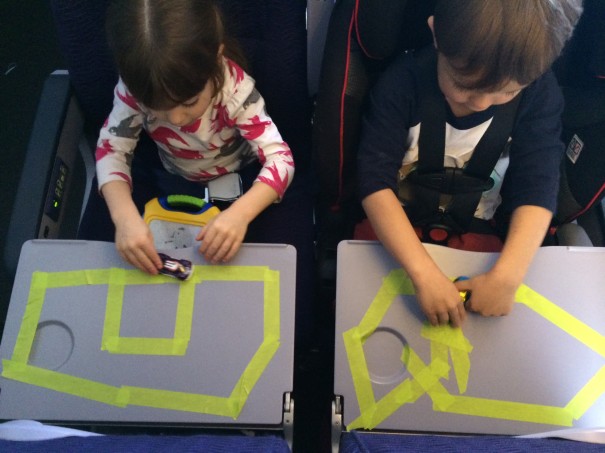 I’m also sure to bring a toy plane for the flight.  The boys get excited when they see a real life airplane and it usually inspires them to play with the toy one as well. 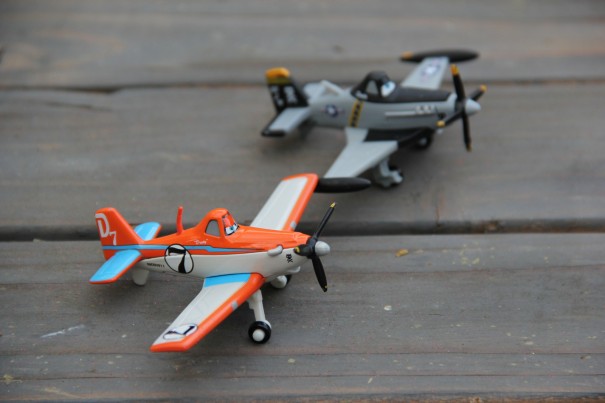 So…how did it go?
It wasn’t all rainbows and butterflies, I’ll tell you that.
There was crying. And grumpiness. And whining. And wriggling. And back arching. And a lot of clock checking by mom and dad.
BUT, being as prepared as we were saved us from what could/would have been a total disaster.
We took a 10am flight there (6.5 hours in the plane)–and Sawyer got motion sick and threw up all over Ben and all over the plane. 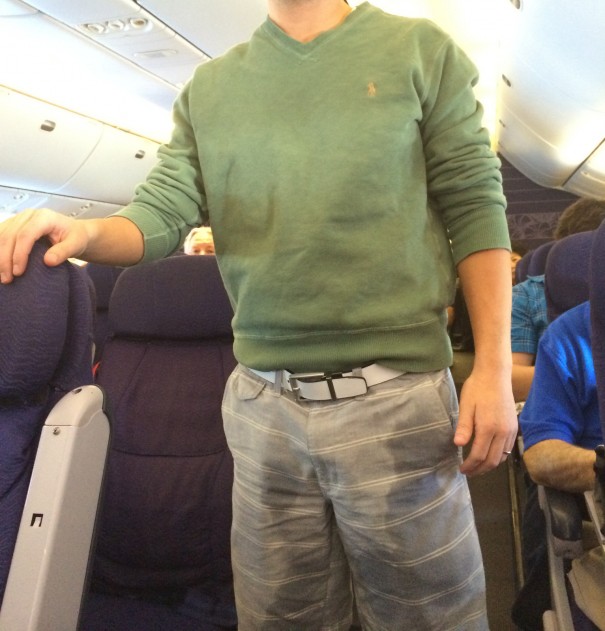 It was yucky and we felt terrible for the poor people sitting next to us, but we handled it all with a smile.  The flight home was a red eye and a much shorter flight (4.5 hours).  The boys slept nearly the entire flight which was awesome! But Mom and Dad didn’t sleep and when we landed the boys were ready for the day and we were exhausted.  The verdict: I would take the red-eye any day over the daytime flight.

In other news, this vacation will be etched in the heart of our family forever.  It was one of my favorite memories for our little family and I’m so grateful that Ben made it happen. Stay tuned for posts about the trip.

Would love for you to add any of your tips or experiences in the comments section. 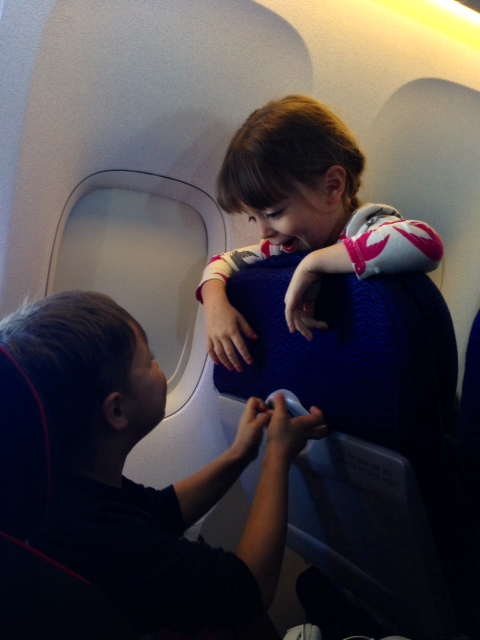 Yep, I Saved the Goober Thingy